Your browser is not supported. Please update it.
Telephone 020 8997 0937
Website by GolfWorking 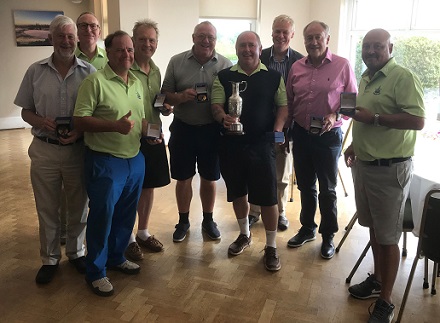 On Thursday 12th September at Sudbury Golf Club the two Seniors’ teams from Muswell Hill and Ealing G.C. teed off to decide the destiny of this year’s hard fought Felmingham Trophy.

The match was held at neutral Sudbury because for the first time in 21 years Ealing, who normally host the final, were actually in the final. We would like to thank Sudbury management for making the course available at short notice and for presenting the course in such an excellent condition and for providing the hospitality after the match.

With Muswell Hill winning twice in 2014 & 2017, Ealing knew they had a lot to do and whether it was there time or inspired by the pre-match team talk they managed to pull it off, winning by consent 5/4. As soon as Ealing had reached the stage of being 5/2 up, the last 2 games were called in with Muswell 1 up in both matches. A close game and played in an excellent spirit. David Froud, the Ealing captain, was extremely proud of his team and over the moon he said even more so than seeing his favourite Spurs side win a trophy. Vico, the Muswell Hill captain was delightful in defeat praising his team for getting to the final again and closely losing to a better team on the day.

The day closed with a meal in Sudbury’s dining room and brief speeches by both Captains. Tributes were paid to the condition of the course, the quality of the food, the sporting atmosphere in which the matches were played and to the work of the Felmingham Committee during the year, especially Ray Trainor for the smooth running of the competition.

Les Wiltshire, Ealing’s President, presented the trophy to the winning team and appropriate medals to both teams.
The Felmingham Committee look forward to the 2022 competition and to Ealing successfully defending their well won Trophy. Who will step up to stop them in 2022? Time will tell. 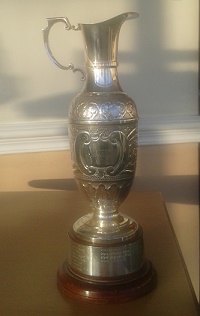